Mr. Kong Jianmin, the Chairman of the board of directors of KWG Group and the member of the school board of Jinan University, Ms. Li Guije, director of KWG Group, Ms. Kuang Xiaoling, executive director of KWG Education Group, senior management of KWG Group, Professor Lin Rupeng, secretary of the Communist Party of Jinan University, Professor Song Xianzhong, principal, Professor Hongan, vice principal as well as persons-in-charge of relevant departments, branches and faculties participated in the ceremony. 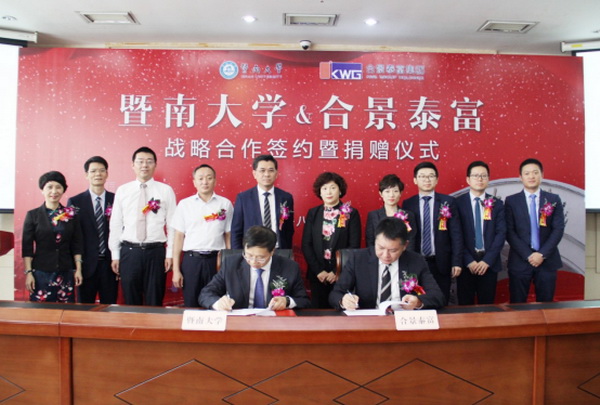 In his speech, Lin Rupeng represented the school to express their sincere gratitude towards Chairman Kong Jianmin and KWG Group. Lin stated that as a representative of outstanding domestic enterprise, KWG Group proactively participated in and supported charity in China and had always assumed social responsibilities as its own business during its development. KWG Group had made significant contribution in various aspects of charity, such as education, poverty alleviation, provision of disaster relief and assistance as well as municipal infrastructure. As an outstanding graduate of the 89th session of Jinan University majoring in computer, Chairman Kong Jianmin had always been grateful to and care about Jinan University. Subsequent to donating RMB10 million to the school, Chairman Kong again donated RMB20 million to support the establishment and development of the school, which deserves the respect from and shall be remembered by the whole school. Based on such donation, Jinan University will be built into a top domestic university with world recognition and high level of standards. 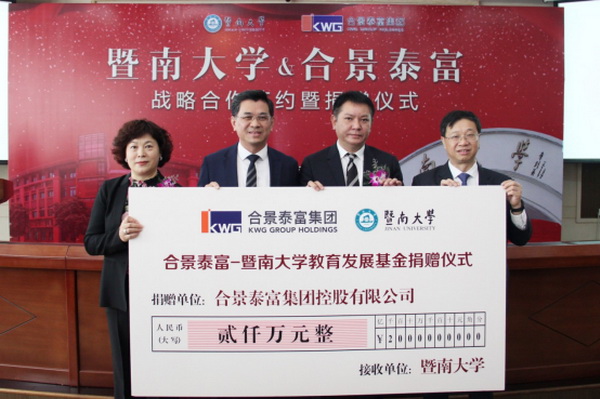 Chairman Kong Jianmin and Principal Song Xianzhong signed a strategic agreement on the renowned school and enterprise co-operation between Jinan University and KWG Group to set a model for co-operation between the business and academic sectors. In the future, both parties will, with the characteristics of an “international bridge”, commence in-depth co-operation by resources sharing and achieving complementary advantages in fields such as pre-school education, basic education, higher education, research and development, training and promotion, medical and elderly care industry projects as well as high-end bio-technology. In the donation ceremony, Lin Rupeng represented Jinan University to receive the donation cheque from Chairman Kong Jianmin and issued a donation certificate and souvenirs to him. Meanwhile, the opening ceremony for “Jianmin Building (健岷楼)” was also held, which highlighted the charity spirit and acts of KWG Group in the campus of Jinan University, while marking Chairman Kong Jianmin’s name down in the history of Jinan University for his advocation of education and sincerity to the school. 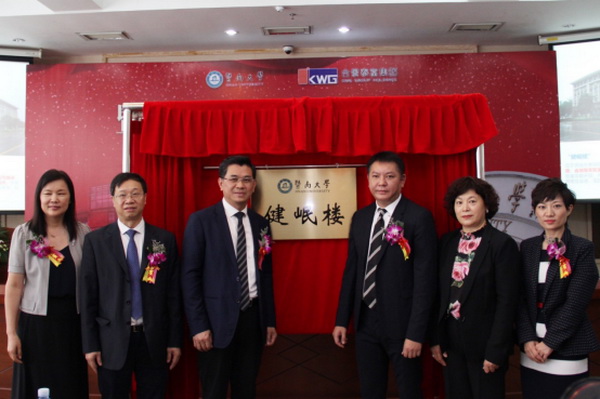 In his speech, Chairman Kong Jianmin stated that education is beneficial to both the country and citizens, and thus supporting education is not only the business of the government but is also a common responsibility of the society. KWG Group established KWG Education Group in 2017 to include education as its key business segment. While emphasizing on humanism and the ability to think, analyse and inquire during education process, KWG Education Group also gives a lot of weight to the sensibility, inspiration and intuitive thinking originated from the heart to help each child to discover his own strengths and reinforce his individuality. On such basis, KWG Education Group gradually expands itself to diversified contents such as pre-school education, basic education, higher education as well as research and development. KWG Education Group strives to establish a holistic and integrated education industry deployment and forges an innovative education ecosystem with comprehensive cultivation inside and outside the school. 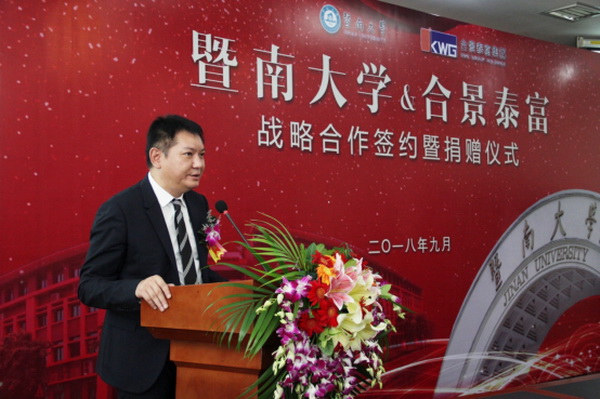 The signing of strategic co-operation agreement and the smooth opening of “Jianmin Building” signified the consensus of education philosophy between KWG Education Group and Jinan University. Such events have opened a new chapter of friendship and co-operation for both parties in anticipation of satisfying the economic and educational development needs for the Greater Bay Area to the maximum extent while facilitating the businesses of both parties to a new height.